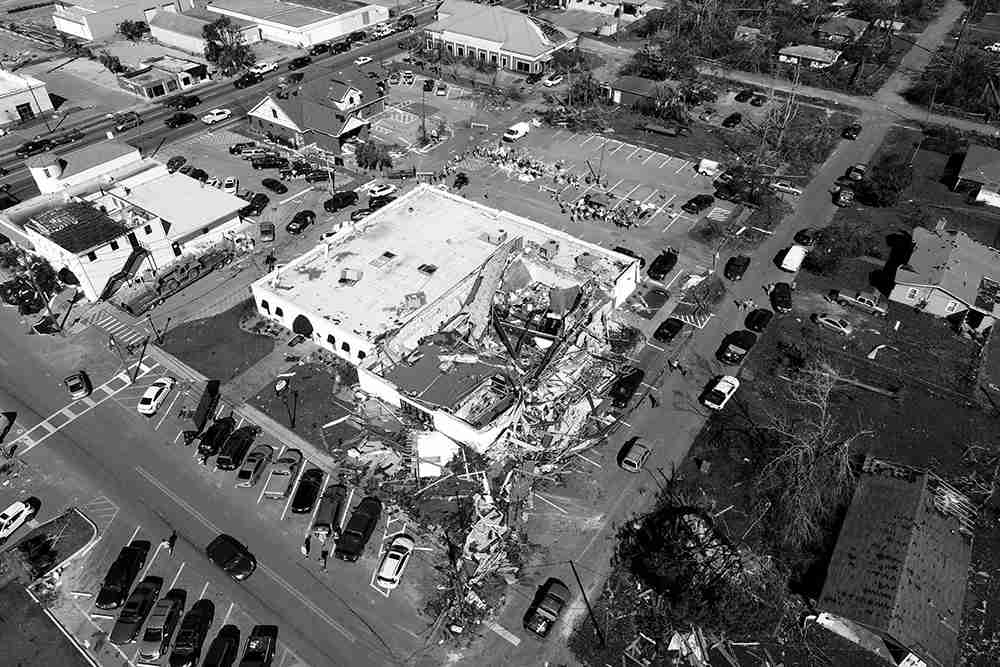 MIAMI – Last year, hurricanes Harvey, Irma, and Maria served as a giant beta test allowing the unmanned systems industry to give the world a glimpse of how unmanned aircraft systems (UAS) can provide an entire new set of capabilities for disaster response. Over the past year many companies have expanded their technology to serve of public safety and emergency management. The landfall of Hurricane Florence now offers the next major evaluation of these systems for catastrophic events.

Except for a few well-trained “Hurricane Hunters,” no aircraft of any type will be flying until storm conditions subside enough to allow for safe flight operations. Even when that happens, you won’t see many manned aircraft in the sky for the first several hours. Savvy aircraft managers move their multi-million-dollar aviation assets outside of the projected path of a hurricane to make sure these aircraft survive the storm. This means pre-positioned drone teams will have the only aircraft immediately available for aviation operations. But even then, operators may be subject to severe restrictions surrounding when and how they can operate UAS based on how the FAA is managing the airspace over the affected areas.

But make no mistake; drones will be the very first aircraft gathering high-resolution imagery and data from the flooding and destruction caused by Hurricane Florence. Here are eights types of UAS operations you will see in response to the storm:

Just about every team conducting official UAS operations will conduct a situational awareness flight as soon as weather conditions allow. The purpose of this flight will be three-fold; (1) to ensure that all aviation flight, control, and data capture systems are working properly, (2) to rapidly assess damage to the surrounding area so responders can get a better sense of the impact of the operating conditions they will be dealing with, and (3) to determine what level of mobile communications bandwidth is available for the streaming or transferring of imagery back to the command or emergency operations center (EOC). Certain teams will immediately begin gathering and sending visual imagery to their designated EOC to provide incident commanders with situational awareness surrounding the scope of the disaster.

Almost all responding agencies will be conducting preliminary damage assessment missions using UAS. This imagery will help incident commanders, emergency managers, and elected officials grasp the true scope of the devastation, so they can better manage the organized chaos which has ensued. Drone imagery will be used to help direct rescue operations and request additional resources for the response effort.

FEMA Urban Search and Rescue (USAR) teams have been prepositioned along the projected track of Florence and have already been conducting swift water rescue operations in many areas. Several of these teams are prepared to use drones to conduct aerial search operations in neighborhoods and other areas inaccessible by other assets due to heavy flooding, fallen trees, and downed power lines. State and local first responders trained to operate UAS will be conducting similar operations around the impact zone as rescuers look for potential victims who failed to heed the repeated calls for evacuation. New UAS technology like Edgybees First Response – a software program designed to provide an augmented reality virtual overlay onto a drone’s video feed – will assist searchers in properly identifying streets and addresses, while also giving operators the capability to place virtual markers on targets of interest.

As long as they have a green light from the FAA, the news media will be among the first to have drones in the air to capture imagery of the storm’s impact. Television and online viewers can expect to see stunning aerial imagery of flooded communities, damaged homes, fallen trees, and every other type of damage imaginable. Local public information officers may also have drone teams capturing imagery to help show evacuated residents the impact of the storm to their community.

UAS flight teams will be used to quickly assess the integrity of critical infrastructure such as dams, bridges, roadways, telecommunications towers, the power grid, and key buildings such as EOC’s, power plants, hospitals and military installations. Some drone teams will include subject matter experts such as engineers who can quickly assess conditions directly from the video feed. Most teams will be tasked with gathering imagery and quickly routing it back to their supervising authority.

Mobile communication networks and electrical power are two of the most critical services that must be restored following the hurricane. Cell phones allow people to request emergency assistance, send and receive news and information, and inform family and friends that they are alive. Companies like AT&T and Verizon have been staging assets for days including special Cell on Wing (CoW) unmanned systems capable of providing mobile service immediately after a storm.

Electricity runs our world, and last year Florida electric companies wrote the playbook on how to use drones to help restore power after a hurricane. Now it is Duke Energy’s turn to carry the ball. Drone flight teams will be capturing imagery of cell towers and power distributions lines so that restoration crew supervisors can rapidly assess the resources they need to restore these essential services as quickly as possible.

Agencies and organizations ranging from the Department of the Interior and U.S. Army Corps of Engineers to local construction companies and public works crews will be using UAS to help map changes to land features including shoreline, coastal areas, environmental preserves, construction projects, and more. Drones will offer cost-efficient, targeted, high-resolution imagery that can provide up to sub-centimeter accuracy for aerial mapping and change detection.

The old model of requiring a claims adjuster to grab a ladder and climb up onto a roof is gone. Starting now you will see all major insurance firms using drone teams to fly over homes, businesses, and other assets to collect aerial photographs of damage to help process claims more efficiently. Smart insurance companies will even be combining satellite imagery and software capabilities from companies like Airbus Aerial with high-resolution UAS imagery collected by drone service contractors to provide some of the most comprehensive claims analytics the insurance industry has ever seen.

Nevertheless, there will be some downsides to this evolution. There is presently little distinction between the professional, UAS pilot with actual disaster experience, and the uninitiated drone operator looking to make a quick buck. This has led to increased competition and falling pay rates for those remote pilots who conduct FAA-approved operations with professional training and commercial grade equipment. Nevertheless, it is an issue that will be sorted out in due time.

For now, another fascinating occurrence is about to begin and the stories and use cases will be bountiful. The dissipation of Hurricane Florence marks the next great display of how UAS will help revolutionize disaster management operations around the world.

Christopher Todd is the founder and president of Miami-based Airborne Response, as well as the Executive Director of the Airborne International Response Team (AIRT). He is a trained emergency manager and FAA-certified remote pilot who has operated unmanned aircraft systems (UAS) during both day and nighttime disaster response operations for Hurricane Irma several other catastrophes. A U.S. Coast Guard trained search and rescue instructor who specializes in high-risk UAS missions for industry and disaster management, Chris has operated UAS in coordinated flight evolutions with manned rescue aircraft, as well as internationally with foreign government entities. Chris serves as the director of the AUVSI Miami Satellite Chapter.